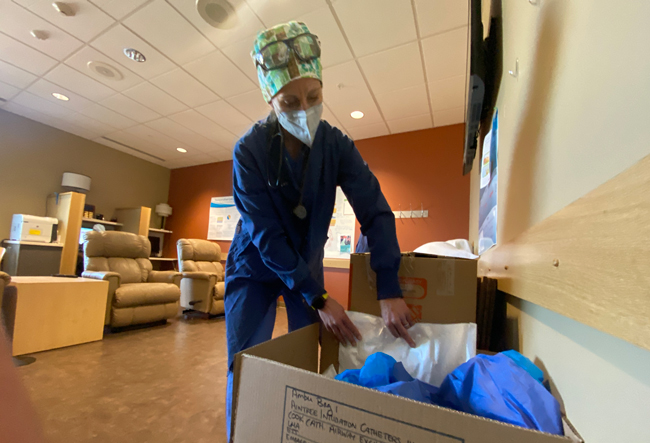 Thanks to a multi-department effort spearheaded by two anesthesiologists, a steady stream of needed medical supplies has been flowing from St. Charles Bend to people in war-torn Ukraine for the past several weeks.

And there is no end in sight.

“This thing has kind of snowballed into something that’s bigger than I expected,” said Dr. Evan Sutton, who is overseeing the effort alongside Dr. Holly Graham, his colleague from the Bend Anesthesiology Group.

Sutton was inspired to start collecting donations by a physician friend who practices in Indiana, but is from Ukraine and still has family there. She is involved with a number of different organizations that are working to provide assistance to the Ukrainian people during the Russian invasion.

“She reached out to several of our friends and colleagues and asked us to consider helping the cause, and I immediately wanted to contribute,” Sutton said. “But I thought that instead of just giving money, maybe there’s something I can do that would be a little bigger and would get more people involved here in Central Oregon.”

Sutton’s idea: To collect unused medical supplies that are typically flagged for donation or disposal, package them up and ship them to the Ukrainian Medical Association of North America, which is gathering similar donations from across the country and distributing them in Ukraine. He worked with Graham and leaders from the anesthesiology group and St. Charles to bring the idea to life, and pretty soon, word of the effort was spreading, he said. Donations came in from the hospital’s Perioperative unit, the Family Birthing Center and beyond, including the Pharmacy, which donated medications that are due to expire and thus cannot be used in the United States, but can be used in a humanitarian crisis.

“There are several different departments involved now, so I think this is going to be an ongoing process,” Sutton said. “Hopefully, we can send supplies out weekly.”

It is not free to ship things across the country, of course, but the group got help on that aspect, too. Home Depot in Bend donated cardboard boxes, and the St. Charles Foundation has pledged up to $5,000 to cover shipping costs, Sutton said.

“Our caregivers are a part of this community and this is something they’re very passionate about. You can tell because it’s been a grassroots effort; this wasn’t something they were prompted to do,” he said. “Giving to people and helping others is good for our health and it’s empowering, because it makes us feel like we have the ability to help from the other side of the world.”

So far, the help has totaled more than 20 boxes and about 450 pounds of supplies, Sutton said, with another large shipment planned for this weekend. In the meantime, the effort is spreading to other St. Charles campuses – caregivers in Redmond are now collecting items to send to Ukraine – and donations are piling up along a wall in a physicians’ lounge at St. Charles Bend.

“I’m just really humbled and honored to be a part of something like this,” Sutton said. “It’s been really cool to see a bunch of people want to participate, and it feels great to be able to help out in any way we can.”